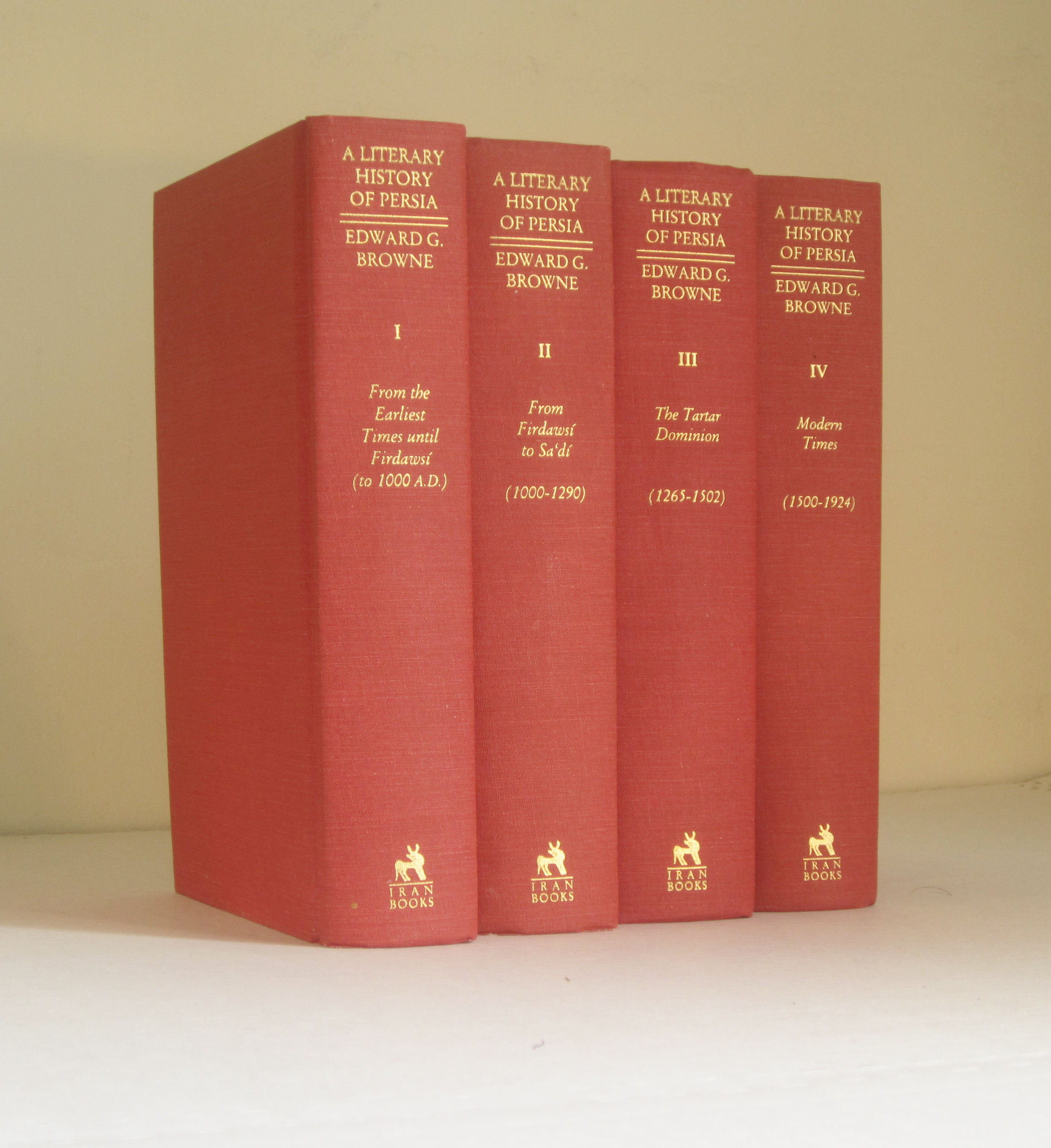 The classic work on the subject, A Literary History of Persia is still the standard work in the English language on the history of Persia and Persian literature. It spans four volumes (2,256 pages) and took about twenty-five years to write. Although it concentrates on Persian literature, it also surveys all aspects of Persian culture from Iranian pre-history to the twentieth century.

This edition is bound in a reinforced cloth cover in four volumes as in the original edition. Professor J.T.P De Bruijn of the University of Leiden has written a new introduction.

The remarkable freshness and liveliness of Browne’s prose will astonish readers. In addition to being a work of reference it is a book which may be read strictly for pleasure. J.T.P. De Bruijn’s new introduction surveys the history, significance and continued value of the work.

… this work … could in the eyes of the Anglo-Saxon world with full right be judged and evaluated as a standard work.

One feature of his work that has definitely withstood the test of time remains to be mentioned: the translations. A Literary History of Persia abounds with specimens of his great skill in rendering Persian poetry into English verse which, though marked by the translator’s period in style and wording, are still extremely readable and provide as true an impression of the originals as this is possible at all. By this he has best succeeded in the ultimate aim of his lifework: to act as an intermediary between the great culture of Persia and a modern readership.

— H.T.P De Bruijn (from the introduction)

Volume One: Persian Literature from the Beginning to Ferdowsi (1000 A.D.).

Book I: On the Origins and General History of the People, Languages, and Literatures of Persia
I. Introductory
II. The Discovery and Interpretation of the Inscriptions and Documents of Ancient Persia, With Other Philological Matter
III. The Pre-Muhammadan Literature of the Persians, With Some Account of Their
Legendary History, As Set Forth In the Book of the Kings

Retrospective and Introductory
The Ghaznawi Period, Until the Death of Sultan Mahmud
The Early Seljuq Period, From the Rise of Tughril Beg Till the Death of Malikshah, Including the Origin of the Order of the Assassins
The Literature of the Early Seljuq Period:
The Nidhamu'l-Mulk and His Contemporaries
The Period of Sanjar and His Brothers
The Four Great Poets of the Late Twelfth Century, Anwari, Khaqani, Nidhami of Ganja, And Dhahir of Faryab
The Empire of Khwarazm and the Mongol Invasion, Until the Fall of Baghdad and the Extinction of the Caliphate
Writers of the Earlier Mongol Period Faridu'd-Din Attar, Jalalu'd-Din Rumi, and Sa'di, and Some Lesser Poets of This Period

Part II Persian Verse During the Last Four Centuries
V. Some General Considerations On the Later and Especially the Religious Poetry of the Persians
VI. Poets of the Classical Tradition. Pre-Qajar Period (A.D. 1500-1800)
VII. Poets of the Qajar Period

Part III Persian Prose During the Last Four Centuries
VIII. The Orthodox Shi'a Faith and Its Exponents, the Mujtahids and Mullas
IX. Prose Writers Until A.D. 1850
X. The Most Modern Developments (A.D. 1850 Onwards)

EDWARD GRANVILLE BROWNE (1862-1926) needs no introduction to those interested in Iran, Persian literature, Iranian history, Babism, Baha'ism or Sufism. He taught at Cambridge University and may be considered as the creator of what is now known as Iranian studies. A Literary History of Persia is his most important work.