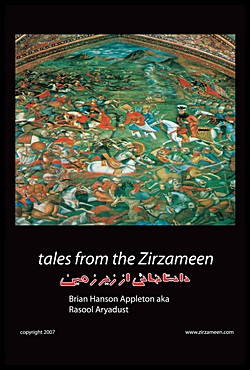 Tales from the Zirzameen reflects on Iranian culture and society as well as the American expatriate culture there in the 1970s. The short stories relate how the author became assimilated there, and he shares his experiences leading up to the revolution and in its aftermath.

Despite the circumstances under which he left the countryùincluding being taken hostage for a timeùthe author celebrates the hospitality and rich culture of the Iranian people. He was welcomed warmly into their society and came to appreciate the sincerity and kindness that characterized the people he met.

It is hoped that placing the people of Iran in greater historical context might familiarize the American people with this ancient culture, showing the human faces that lie behind the current political propaganda. The objective is peace and recognition of our common humanity.

About the Author
Brian Hanson Appleton aka Rasool Aryadust was born in Tokyo, Japan, and grew up in Greece and Italy as a self-described ôarmy brat.ö As an adult, he lived in Iran for five years before, during, and after the Iranian Revolution of 1979. Prior to working there, he attained a bachelor of arts degree in anthropology from George Washington University, graduating Phi Beta Kappa. He recently received his master of arts degree in ancient history from the International University of Fundamental Studies Oxford Educational Network, Saint Petersburg, Russia. He also earned his TEFOL certification from Georgetown University.
The author now resides in California with his wife, Laura, and he is the father of Luke and Alex. He is currently employed in lighting design and sales and is the author of numerous published magazine articles.

Title: Tales from the Zirzameen