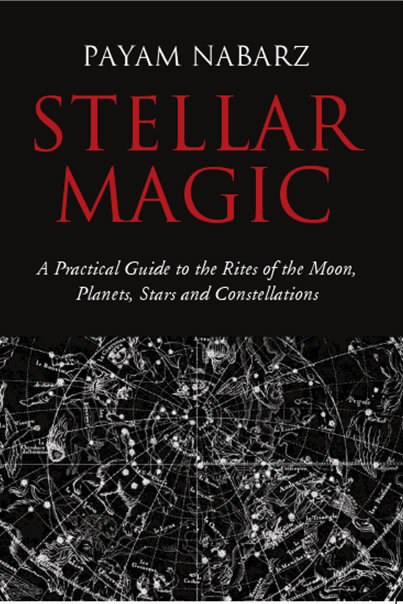 STELLAR MAGIC: A PRACTICAL GUIDE TO THE RITES OF THE MOON, PLANETS, STARS AND CONSTELLATIONS

Stellar Magic by Payam Nabarz A Practical Guide to Rites of the Moon, Planets, Stars and Constellations The practical rites and ceremonies in this Liber Astrum are created using a myriad of hymns and tales, drawing inspiration and material from many ancient, classical and medieval sources including: the Hymns of Orpheus, Ovid's Metamorphoses , Plato's Timaeus, the Hermetica: The Greek Corpus Hermeticum and the Latin Asclepius, the Greek Magical Papyri, the Chaldean Oracles, the Persian Shah Nameh 'Epic of Kings' by Ferdowsi, Scipio's Dream by Cicero, the Persian Pahlavi Texts, book of Enoch, Bible Ezekiel chapter, Egyptian temples and texts, The Golden Ass by Lucius Apuleius, the Zoroastrian Yasht hymns, Sufi works of Ibn Arabi and Rumi, the Kabalistic Sefer Yetzirah, the Mithras Liturgy, Persian Burj Nameh, the Picatrix, Hesiod Works and Days, Homer's The Odyssey, Porphyry's On the Cave of the Nymphs and Aratus' Phaenomena. In bringing these ancient rites into modern times, stellar related material and ideals by modern poets such as WB Yeats, Robert Graves, Sylvia Plath, and esoteric writers such as John Milton, John Dee, Elias Ashmole, Francis Barrett, Rudolf Steiner, Aleister Crowley, Gerald Gardner have also been included, giving a Bardic blend of the ancient and the modern. The rites here 'set the scene' and after all the poems and invocations are uttered, the point is reached in the rite where the magus has to make his/her direct connection, and to draw inspiration from the stellar well directly. The rites here are the beginning steps on your stellar journey, it is recommended that you write your own poems and invocations to the constellations and make your Path to the stars. This is a highly accessible, succinct and practical book on this complex subject. It is written in such a way that it can be used as a manual and workbook for practicing stellar magic or simply read for gaining insight into star lore. -------- Praise for Stellar Magic:

Title: STELLAR MAGIC: A PRACTICAL GUIDE TO THE RITES OF THE MOON, PLANETS, STARS AND CONSTELLATIONS

STELLAR MAGIC: A PRACTICAL GUIDE TO THE RITES OF THE MOON, PLANETS, STARS AND CONSTELLATIONS