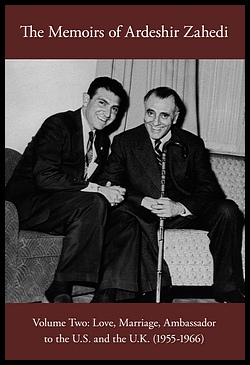 The second volume of Ardeshir Zahedi’s memoirs covers the years 1955 to 1966. During that period, his father passes away, he falls in love and marries the Shah's daughter, Shahnaz. He is appointed ambassador to the United Kingdom and learns the interactions of British civil and court politics. He is then appointed ambassador to the United States where he becomes acquainted, among others, with President Eisenhower, Vice President Nixon and the Kennedy brothers. He also experiences the student opposition to the Shah in the United States. He describes his and Princess Shahnaz’s involvement in the process of selecting a suitable wife for the Shah, who had recently separated from Queen Soraya, who could not bear an heir.