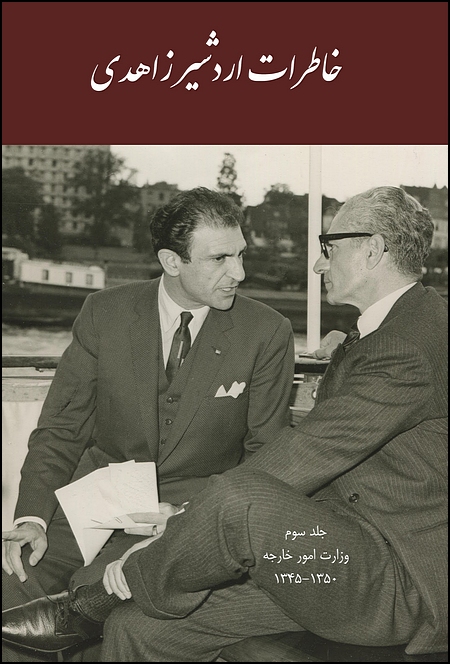 The third volume of Ardeshir Zahedi’s memoirs covers the period from 1966 to 1971, when he served as Iran’s minister of foreign affairs. His accounts and reflections give insight into the Shah's philosophy of leadership and foreign policy. During Zahedi s tenure as foreign minister, significant events include the Shah’s coronation, Bahrain’s separation from Iran, and Zahedi's fractious relations with the prime minister. Under Zahedi's stewardship, Iran established relations with numerous countries and became an international force for peace. During this period, Iran accepted Bahrain’s independence, signed the international Treaty on the Non-Proliferation of Nuclear Weapons, and re-established relations with Egypt. The status of the Iranian foreign ministry was raised. Iranians could travel to numerous countries without a visa. More Iranian embassies were opened around the world, and Iranian diplomats were hired based on their competence rather than their family background. Strong, reliable communications and relations were established with fellow Muslim countries, the non-allied movement, and the global superpowers. Zahedi helped develop strong ties between Iran and the world and also formed personal friendships with many of their leaders and foreign ministers. We learn about his political and personal relations with Marshal Tito, Lyndon Johnson, Richard Nixon, Iskander Mirza of Pakistan, King Hussein of Jordan, King Hassan of Morroco, Luis Echeverría of Mexico, Giovanni Leone, Aldo Moro, William Rogers, Henry Kissinger, Ihsan Sabri Caglayangil of Turkey, Abdullah Salah of Jordan, Mahmoud Riad of Egypt, and others. On the global stage, these years saw the assassinations of Martin Luther King and Robert Kennedy, the 1967 Arab Israeli War, the Vietnam War, and Neil Armstrong landing on the moon. Zahedi relates how Iran perceived these events and how the country was affected by them. This two-book set includes 200 photographs and more than 3,000 pages of previously unpublished documents.